When I left Atlanta Tuesday morning, the low was 72. the high in Maine was 75. When I returned early Sunday morning, Atlanta was a high of 89. What better time to go to New England where the highs are in the 70s and low 80s?
Stats:
1294 miles traveled
6 ice creams
5 days & nights
4 states
3 national and state parks
2 AirBnBs
1 baseball game

Vacations between jobs are the best. My new job starts on Monday, July 15, and my last day at Georgia Tech was Monday, July 8. I knew when my vacation was over, I would walk into my new job with an empty inbox, and no list of things to do after being out for a week. I flew into Boston, and picked up my rental car around 11am.

My first stop? Kennebunkport for a lobster roll, ice cream, and a stroll around this exquisite slice of Americana. 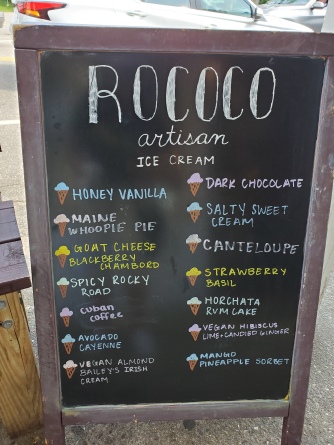 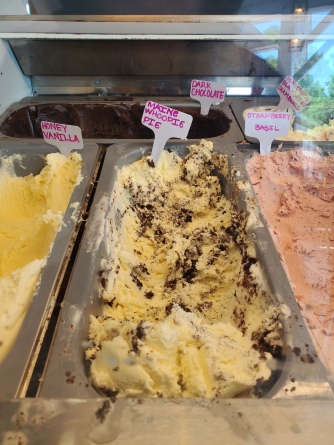 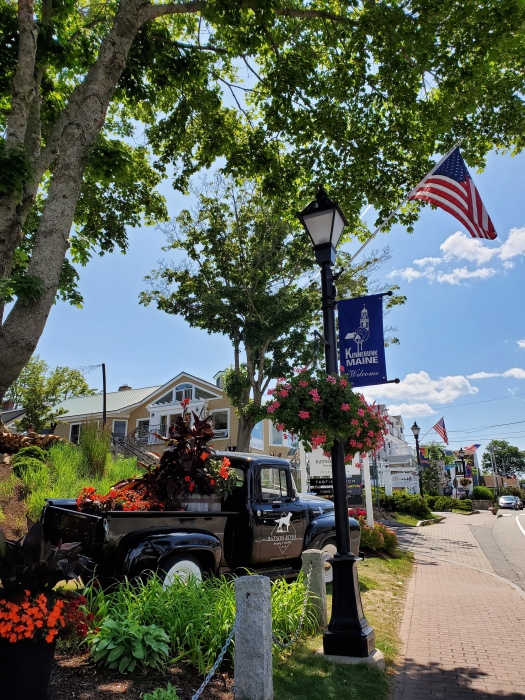 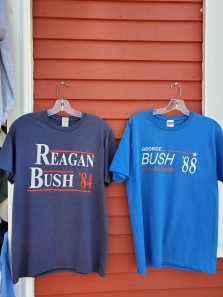 I found a rental about a half hour from Acadia National Park that was on the water. It took awhile to get there because I took the scenic route on Route 1, and kept stopping to enjoy the views and take photos, including the Penobscot Narrows Bridge over the Penobscot River. 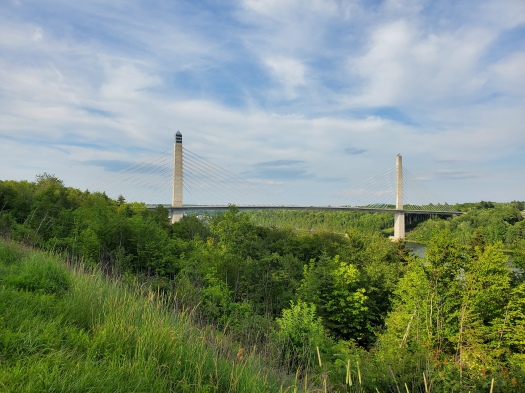 By the time I got to the rental, it was getting dark, and I was greeted with a beautiful sunset behind the house.

The second day, I set out for Acadia National Park, the initial reason I decided to make New England my destination for this trip. I decided to go ahead and get an annual pass for National Park Service; considering how much I visit state and national parks, I think it will be a great investment! I hiked the Jordan Pond and Cliffs Trails, and went to the summit of Cadillac Mountain. 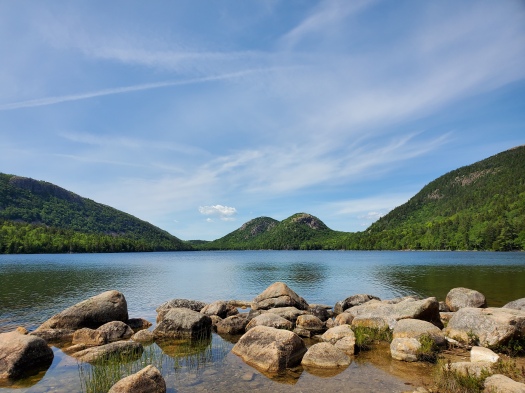 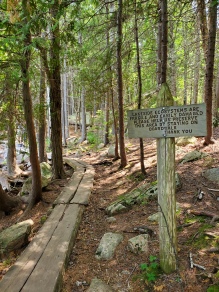 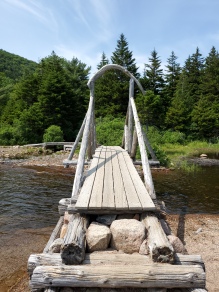 The town of Bar Harbor, or as the locals say, Bah Hahbah, is close by, so I walked around the waterfront, and grabbed some dinner at Galyn’s – lobster bisque, crab-stuffed mushrooms and a local brew, Allagash White.

I turned in early because I wanted to get in early to get to the summit of Cadillac Mountain to watch the sunrise. I was told it was too good to miss, especially after traveling a thousand miles.

My third day started with the sunrise at the highest point of Acadia National Park, and it was well worth getting there at dawn. I didn’t expect so many people to be there to watch the sunrise, but apparently this is one of the highlights of Acadia National Park. I wish I had time to get lunch at Jordan Pond House, where there are beautiful waterfront views from the balcony.

The vernacular in Maine goes far beyond “wicked”, including:
* Down East (derived from a sailing term, sailors from western ports sailed downwind toward the east to reach the area)
* Town line (vs city limits)
* Water ponds on the road (flooding)
* Lobster pound (where you go to shop for lobsters, and they usually boil them for you and even sell side items)
Speaking oddities, how about the law that you can’t burn firewood from out of state? I learned all of these while driving around the state the first three days of my vacation.

I knew I would have a few good hours in Maine before it started raining, so I set out to find some of Maine’s famous lighthouses. I only saw two since they are located on the ends of peninsulas, and take forever to get to: Bass Harbor Head Lighthouse and Dyce Head Lighthouse. The views of Bass Harbor were well worth it, but Dyce Head not as much, though it was picturesque. For Bass Harbor, be sure to wear shoes that made for climbing on rocks; if you want to get the best views, you will have to climb down and back up the rocks in the photo.

I wanted to see more of New Hampshire, but it started pouring as soon as I crossed the state line from Maine into New Hampshire. The drive took a few extra hours, thanks to some accidents and slowing down for toll booths. I do feel somewhat better that Georgia isn’t the only state with drivers who sit in the left lane, or drivers who don’t use their headlights when it’s raining.
Vermont treated me much better after driving through the nasty thunderstorms, complete with ground shaking thunder and bright as day lightning. Day 4 started with a short hike to Thundering Falls which is on the Appalachian Trail. 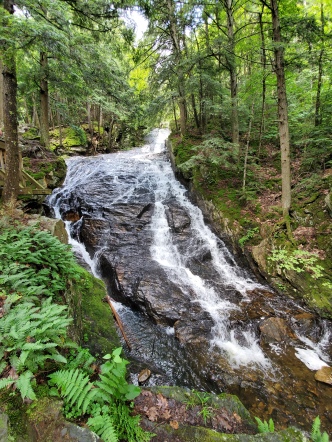 To get to the falls, walk on a boardwalk over a marshy area; upon entering the woods, on the left is an access point for the Appalachian Trail, and to the right, Thundering Falls, and the mill that was powered by the falls. 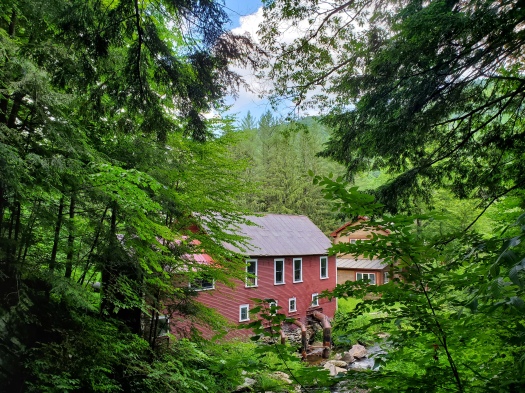 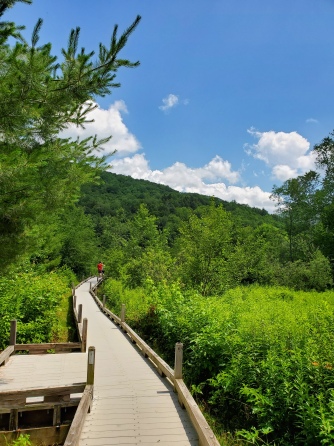 I didn’t know it when I started the day at Thundering Falls, but Day 4 was to be the Day of Dairy. After the hike, I drove south to Woodstock. 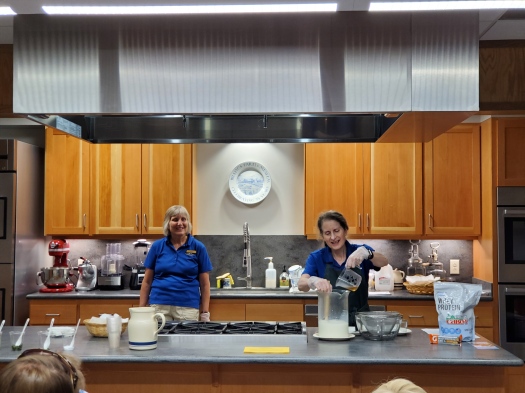 At the Billings Farm & Museum, I had a snack of curds and whey, and saw a demonstration of how cheese is made. The museum included information about how farming around the country ranged from small, family run farms to large-scale farms like many of the ones that are still in operation in Vermont. 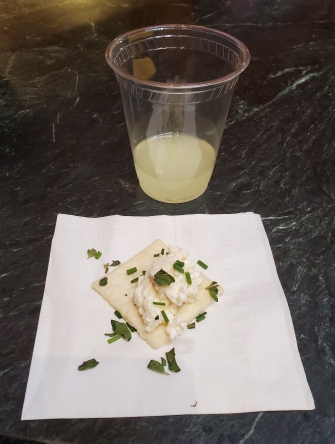 They still raise cows at the farm, but most of the dairy operations are off-site now. They do still sell ice cream at the farm, so I had to sample it, of course.

One of those cows tried to follow me across the street to the Marsh Billings Rockefeller National Park, the only national park in Vermont.

The Marsh Billings Rockefeller home is surrounded by several trails which make up the national park. This was the original home of the Marsh and Billings families. The Rockefeller name was added after one of the Billings grandchildren married a Rockefeller. Charles Marsh was a lawyer and conservationist, and later served as ambassador to the Ottoman Empire and Italy.
Frederick Billings bought the home after Marsh moved overseas. He was a lawyer and conservationist as well, and served as president of the Northern Pacific Railway. He became known as a conservationist because he noticed how deforestation ruined the wildlife and natural setting of his home state. He bought failing farms that led to the deforestation and planted trees that are still growing to this day. He is also credited with planting vegetation and trees along the railway he ran to replace the trees that were taken down during the railway’s construction, and is the namesake of Billings, Montana. He created the managed forest and trails around his house, and built the farm and the caretaker’s house across the street. The farm was one of the first progressive dairy farm operations in the nation. 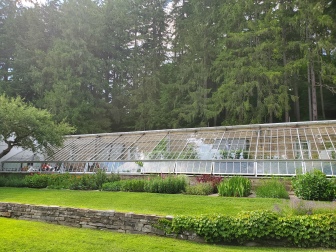 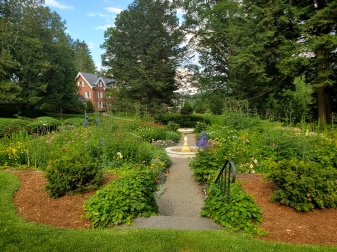 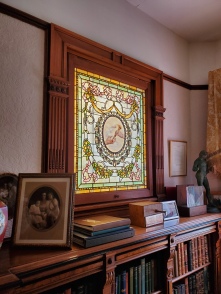 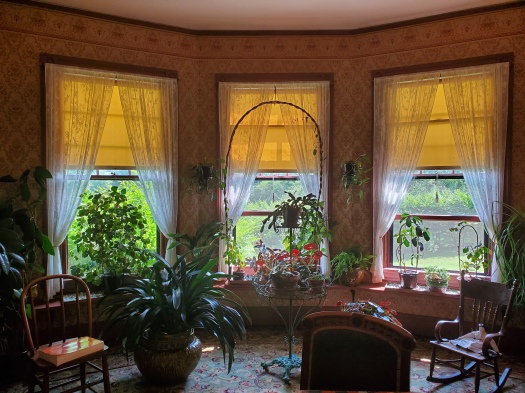 After touring the house, greenhouse and English gardens, we made ice cream! 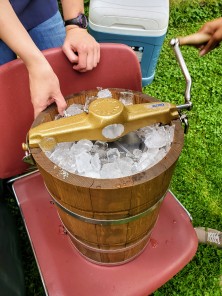 This was a special treat for even wealthy families in the 19th century. While I had my turn churning the ice cream, I asked about typical flavors for that time period. Vanilla and chocolate, the norms today, were hard to find then. More common were fruits like blueberry, strawberry, blackberry and pumpkin. By the way, that was my second ice cream of the day; I had one at the farm earlier that day.
I wasn’t done with ice cream yet… Ben & Jerry’s was waiting for me in Woodbury. You can’t take photos on the tour of the facility, but there are plenty of grammable moments in the outer part of the factory and the grounds, including the Flavor Graveyard. Yes, the Flavor Graveyard. The touring facility creates five flavors a day, but there is another larger facility nearby that makes the majority of Ben & Jerry’s flavors. 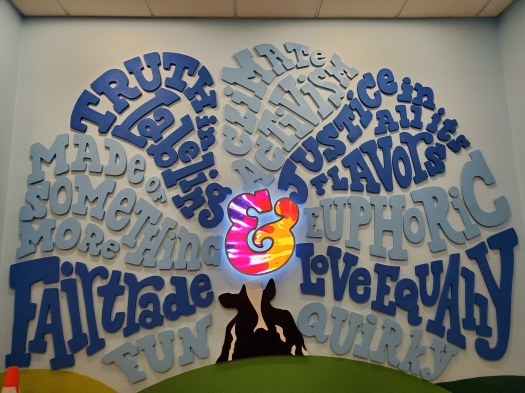 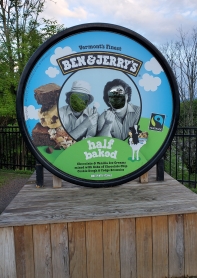 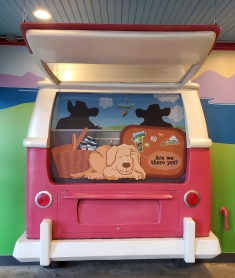 I didn’t see as many road signs in Vermont as I did in Maine, so the only etymological oddity I noticed was that they said “constable” instead of “sheriff.” I did notice how many solar panels were all over the state. There was a solar panel farm behind the Ben & Jerry’s factory, and many of the farms I drove by were solar-powered.

My last full day in New England was driving from Vermont to Boston. I made put stops to see Queechee Gorge and Dartmouth College, but they were very quick stops.

I had a hot date with the Downton Abbey Exhibition in Boston at 3pm. I had been watching for this exhibit to come near Atlanta since its debut in New York last year, and spending several months in West Palm Beach recently. My trip coinciding with the exhibit in Boston seemed too good to pass up, especially with the new Downton Abbey movie coming out in September. 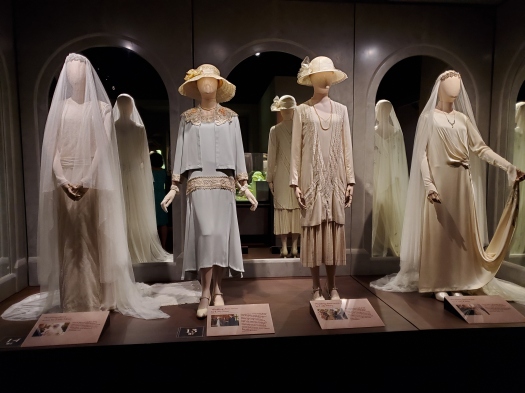 Then I noticed that the Red Sox were in town, and they had a game against the Dodgers at 7pm. Jackpot! I have been to Boston several times, but never when the Red Sox were in season, so all I was able to do before was a tour of Fenway Park, which was pretty interesting anyway. The game was just as I imagined it, other than the Dodgers blowing out the Red Sox. Two Aussies were sitting next to me, so me and the Dodgers fan I was surrounded by were explaining baseball to them. Most of the Red Sox fans left, but we stuck around to sing “Take Me Out To The Ballgame” and “Sweet Caroline”. 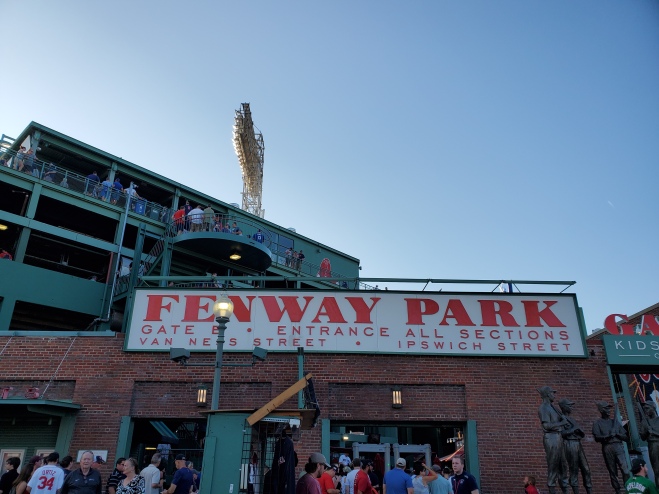 I got back to the hotel late, and had enough time to pack and get a couple of hours of sleep before getting to the airport at 4am for my 6am flight back to Atlanta.
I didn’t get to St. Gaudens National Historic Park and Mt Washington in New Hampshire, and several lighthouses in Maine, but now I have things to see on my next trip to New England. This was the perfect vacation before starting a new journey in my career.

One Reply to “New England To New Opportunity”